The old wine press in our garden 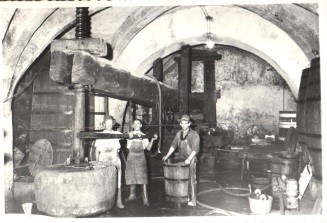 “Her wiert uns dürstet also sere, trag auf wein” sang the minstrel Oswald von Wolkenstein who is buried at the monastery Neustift in a famous song. It means something along the lines of “Innkeeper, we are mighty thirsty, bring some wine”, so clearly he enjoyed the wine cultivated here at the monastery.

The old wine press in our garden, called a Torggl, has a very close connection to the wine of Neustift. From the year 1717 onwards it was used in the monastery’s winery, before finally being replaced by a hydraulic press in 1969. Since then it has found its place in our garden.

A special feature of the press is the 12-metre-long Torgglbaum, the pressing beam. Placed below it is the basked into which the grapes were filled and subsequently pressed. The juice flowed through the holes in its wall. Situated at the other end of the Torgglbaum is the Torgglstein, whose weight of several hundred kilos was used to control the pressing process. By turning the spindle, the pressing beam could be lowered or lifted and the pressure on the basket increased or decreased.

Today the monastery’s winery is equipped with the most up-to-date technology and every year produces characterful and world-renowned wines, especially the white wines typical for the Eisack Valley such as Sylvaner, Kerner, Gewürztraminer and Müller Thurgau.

The fully preserved Torggl at the Hotel Brückenwirt is an impressive witness to the long tradition of wine making which has been perfected in this region over many centuries.