Bridges over the Eisack in Neustift 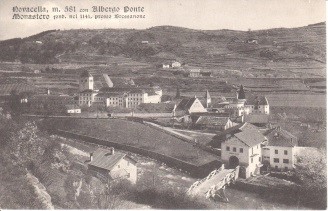 The covered bridge which gave the inn its name is a testament to the old art of timber-frame construction and one of Neustift’s architectural monuments.

The first bridge across the river Eisack was built in 1507 from stone. A gate house was erected next to it and thus began the story of the Brückenwirt.

In 1636 the pest raged in and around Neustift and the wooden bridge with the gabled roof became a barrier, guarded by two men who only allowed those through that could produce a certificate which proved their good health.

In later years the bridge functioned instead as a gateway to Neustift. Up until the year 2010 the 3.3-metre-wide bridge was the main access road to the monastery coming from Brixen. Countless numbers of cars as well as busses and lorries crossed the bridge daily for decades.

These days a simple concrete girder bridge a little further from the house provides a crossing for traffic, while the old wooden bridge is now only open to pedestrians. Yet for the Brückenwirt it will always remain more than just a way across the river Eisack.